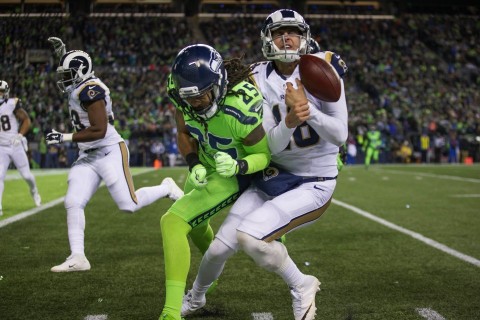 As Green Day so willfully sung it… I wanna be the minority!!! And since we were rocking our action green color rush unis, well I feel it’s a fitting tune to kick us off on this week’s 3 IN, 3 OUT!

I feel like the moral majority of Seahawks punditry pounded us from the moment the clocks struck zero that this W vs. our division rivals somehow wasn’t good enough. I was on the other end of that spectrum.

I think the big difference is, I don’t need some amazingly convincing, all cylinders firing win versus the Hollywood Rams on a short week to make me feel like we’re a Super Bowl contender. What we needed was a W and a Lions loss come Sunday to put us back in the 2-seed. And that is exactly what we got.

Being the 2-seed equates to our ‘Hawks being a SB contender! As Adam from the pod would routinely say, “This ain’t rocket surgery people!”.

I for one got a ton of satisfaction from this needed W and with all this rock n’ roll infused innuendo-ing we’re doing here, we gotta start with an IN right? You’re bloody well right.

Perhaps that’s a literary stretch of sorts but ya know what else was??? Mike Morgan’s ability to not only set the edge on multiple running plays out wide, but his ability to shed his would be blocker(s) and to haul down Gurley and company for big time tackles behind the line of scrimmage.

Morgan’s value went up when he was missing from our line-up due to injury. We know Morgan isn’t flashy nor does he have the speed of Irvin off the edge, but he is making his presence felt on that D-line since coming back from injury. Couple that with the fact that most folks prefer to talk about Sherman’s screams or Bennett’s ‘one pump too many’ and it leaves a nice little scene missing where ‘Hawks fans aren’t givin’ the Holiday love to Mr. Morgan.

Well… much like the famous Seattle-ite Dr. Frasier Crane… I’m listening… and watching, and I like what I see!!! And guess what? It’s not just me people, so let’s hear it for Mr. Flocktimus Prime himself who called this one out early in the match as well:

@FlocktimusPrime @Mike17mo yeah man, I've got Morgan on the IN side of this ledger – great game! #GoHawks

Along with visions of sugar plums (aka that third pump from Bennett) dancing in my noggin, I’m also seeing Morgan being a crucial player if and when we get that match up with dem ‘Boys in January.

No… Not the fake punt, I actually loved that. Loved the call, and 80% of the execution. No it was something far more subtle that really grinded my gears and it happened quite early.

On our first two kicking attempts – one kickoff and one punt – we took 2 personal fouls.

This infuriates me beyond belief. When folks look at this game, they might see a Rams team that actually did move the ball a bit and a Seahawks team that perhaps got a bit lucky as the Virgin Connie Swail coach of the Hollywood Rams made a few decisions that backfired big time.

Sure and fair … and sure, but I see two opportunities where we had the Rams starting at their own 13 and 14 that instead became the 28 and 29 respectively. Want to lose on the road in the playoffs??? Do exactly that.

I kinda loved the early challenges to demoralize the Hollywood Rams. I’m not so much sure we need to give Coach Carroll props for challenging both of the hideous calls because they were so clearly wins for our ‘Hawks, but nonetheless it reminded me of Double Dare and it made me smile getting to watch Gurely get stuffed over and over and over and over and over again until the refs emerged from the hoodie and proclaimed what we all knew to be true… he was not even friggin close to converting that 4th down attempt!!!

Nicely done Seahawks! Refs, seriously do better!!! Coach Carroll … well we love ya, you do you Coach!

OUT – Rush Hour Too?

The clear and present danger of this game was our inability to run block yet again. Que lastima! It was so not good that it HAD to be ‘awarded’ an OUT in this week’s article. We hate having to go to the obvious well here, but how many times can we watch Rawls get hit behind the line of scrimmage?

The Rams still sport a very good defensive line and they routinely give us fits, so this is not shocking by any means.

But guess where the Giants rank in run defense?

And how ‘bout dem Cowboys???

Yeah, this OUT isn’t about this performance. It’s about Mamma Cleo getting verklempt over the ghost of future past derailing us come January. Now is there also room for optimism? You bet your sugar plums there is…

The Camthers are ranked 3rd against the run … and well…

Everything about this is juuuuuusssssst right:

But there's something way righter about it than just that one highlight.

Ladies and gentlemen… Tyler Lockett is getting Jermaine Kearse’s targets.

Ladies and gentlemen… get prepared to tweet ‘Rhymes with Rocket’ … a lot.

As @clintonbon reminds us, it rhymes with Rocket ?

I’m unsure we’ve ever had a year long back and forth dilemma as we have with Chop-Chop in 2016. I’ve personally gone back and forth and of course continued to root for him to prove us all wrong by re-emerging as a consistent contributor with a penchant for hauling in the tough, clutch catch.

Maybe, just maybe as 2016 ends, so too does this internal argument over whether or not we want or need Jermaine to step up his game? Maybe, just maybe this OUT is actually a Trojan IN in disguise?

If the last game was any indication it validates our gut. We’re better off not targeting Kearse and instead distributing those attempts to Lockett and others.

I continued to struggle with this throughout the week, but then I read about Jermaine’s no good, rotten, very bad season … and well, sometimes you just can’t ignore the facts.
Is Kearse as Seattle’s WR2 day’s finally done? Can we say yes???

Let's all be super happy for Lockett who was given the opportunity to take the WR2 reins and ran with them.

Overall Flock, I really enjoyed this game and if that makes me a contrarian or perhaps a pollyanna, then so be it… Lather the tar, feather me in action green if you must, but to end in cliche… At the end of the day… we won.

And winning is better than losing.

Nothing warms the cockles more than lobs of hilarity and observations from the Flock who make gameday that much more satisfying. We’ve already heard from Flocktimus and UK Ross, so who else was throwin’ sexy deep tweets the #3i3o way?

Stuart from across the pond got to shout BINGO! … but for all the wrong reasons:

One note about that fearsome foursome… if it weren’t for one extra thrust (and I suppose a holding penalty too) that same foursome would’ve recorded at least 1 sack each!

Speaking of thrusting sacks… let’s go back to Flocktimus one more time to close this out:

It's always the 3rd pump that catches the ire of Goodell's goons. #BlackSanta #BennettPumps #PumpsForPanama ??? https://t.co/dbd7BsvLbs

Let’s just make this easy shall we? Let’s further ruin Arians’ awful season. We buried the Camthers 2 weeks ago and though the Cards are already eliminated from the postseason, let’s put that final ooooofa on top of his stupid hat and send the redbirds back home for Christmas shaking their beaks and searching for spiked eggnog to wash away the pain.

Let’s take one more huge step to securing that 2 seed, we need it!

What do we want for Christmas?

What do we want for Christmas? … What we always want, a Seahawks W !!!

Merry Christmas, Happy Hanukkah, and Happy Holidays to you, yours, and our Flock!