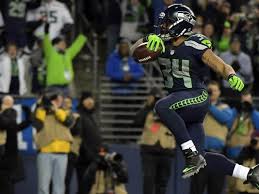 Well… that felt great didn't it! Between the trusty notepad, the trusty socks, the trusty pen, the liberal consumption of Yuengling… oh… oh perhaps that was just me. Anyway, this 26 to 6 dismantling of the Lions felt darn good… and with good reason.

We had sexy deep balls. We had homes being built for Haiti. We had BWagz just going All-World (again) on an opponent. And yes… we even had the reverse butt-fumble.

As we discussed last week, we created a video for 3 IN, 3 OUT for the 2nd week in a row because of the Hawkra baby!!! We beat the 49ers, so we created last week's vid… we now took out the Lions, so we created a brand new vid! FTR I haven't shaved in 2 weeks and let's just say my lucky draws don't ‘feel' so lucky anymore … BUT these are the sacrifices we make for our beloved ‘Hawks!!!

What's in store for this week's 3 IN, 3 OUT video you ask? Singing (multiple times), a NEW Mamma Cleo prediction – keep in mind last week she predicted that Paul Richardson would be an unlikely hero!!! – and, well … some more.

This should fire ya'll up and keep on reading below the vid as we share some choice tweets from the Flock as well as some companion tweets that tie to this week's video. This was so much fun… let's do it again… and again… and… oooooooooone more time after that for good measure.

Enjoy this week's 3 IN, 3 OUT – Playoff Game 1 as we destroyed Detroit Rock City!

These are tweets and such that go with the video above… ya dig?

This was the PERFECT example of imposing our will: Britt, Soul Glo!, and Willson Phillips all doing their thang:

“The #Seahawks stretched out his hand over the sea then Luke Willson swept the sea back so the #Lions were divided.”

The Yoink From Elite Doug Baldwin

Sorry Kearse, once you catch something off your butt, you can have a touchdown.#Seahawks #GoHawks pic.twitter.com/k1cK9Ciaqy

We had some great ones fly in from across the Interwebs on both Facebook and Twitter … so let's see what we have shall we?

Brandan and Adam had all the feels… which lead to all the INs for P-Rich:

As you saw in the vid, both DCH and Ross Wil answered the call for much needed OUTS… here's another from DCH – thanks man!

@clintonbon @SeaHawkersPod #3i3o OUT suspect safety play that could be exploited next week. OUT early game pass rush

Second verse, same as the first: