3 In, 3 Out is a concise, yet somewhat satisfying recap of 3 things that went well for the Seahawks and 3 things that ummmm… didn’t. The coverage will go deeper than the average bear – for instance this will be the only mention of… 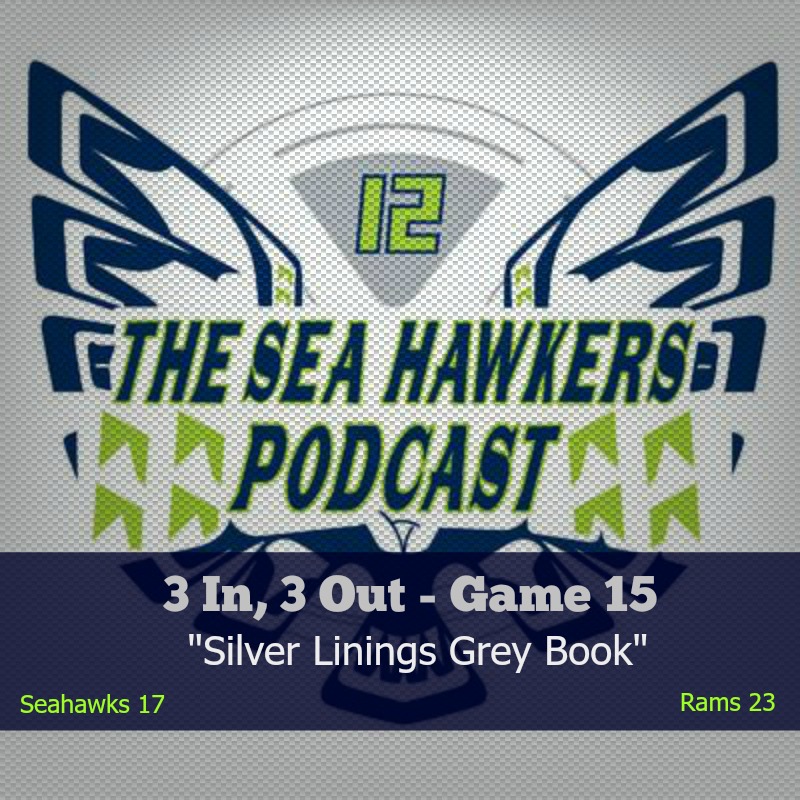 A reaaaaaaal munson. That’s what this game felt like. It started poorly… and just tapered off from there. We feel beat up. We are definitely shaking our heads… BUT… as always, there is a silver lining! Going to buck tradition and start with an OUT so we can refocus and end on an IN.

OUT – What a start!!! *slams head into nearest desk*

Down 10 – 0 in the 1st quarter shortly after the sequence of ‘happenings’ above, Seattle decided to punt on a 4th and 1 from the Rams 43. I wasn’t a big fan of the decision, but, I was a HUGE fan of the execution.

On #3i3o, we’ve been hard on our American Ninja Punter due to our inability to pin teams deep via the punt. On Sunday, Ryan executed two beautiful punts, both downed around the opposing 5 yard line.

It may seem like a small victory, but as the weather turns colder, and the January games get played in potentially sloppy conditions (sans Arizona), executing in our punt game will have a significant impact wrt how deep this Seahawks team can go. However this does lead us directly into our next OUT.

At the onset of the game, it was reported that Pro Bowler @MosesBread72 was at about 70% due to a nagging toe injury. Man did it show.

Case Keenum is fairly athletic in the pocket, so credit where due and all, but we just didn’t put him into many bad situations. As Brandan and Adam discussed on the pod leading up to the match, Keenum under pressure = a pretty bad QB. Unfortunately, we couldn’t seem to turn our Freddie Mercury dials up to 11 in this game.

If this is Bennett at 70%, perhaps it’s time in week 17 to rest that toe and get ready for the first round of the playoffs?

Of course, the glass-full side of me will still point out that Case only threw for a paltry 103 while completing a smidge over 60% of his attempts.

IN – Sharing Some Love for the One Called Angry Doug

Congrats is due. Plain, simple. The man has put together a legitimate historic season for our Seahawks!!! His receiving TD record breaker was gorgeous and Baldwin went over 1000 yards for the year as well. Enjoy it 12s and congrats to one Angry Doug Baldwin!!!

Pardon the cliche', but all Doug Baldwin does is score touchdowns. pic.twitter.com/gNFemOsXpd

I found myself listening in for Jeff Fischer to pull his best Hans Gruber, alerting his front 7 to ‘Shoot the glass’. And in many ways, the Rams did, making it extremely hard for Russell Wilson and company to do Russell Wilson things.

Now the big question: Was this a true regression or simply a ‘typical’ Ramsgression? A few items to consider:

So what do you think? A big time regression or what’s become a typical ‘Ramsgression’?

In – We NEVER Gave Up

When Russell connected with Kearse with 17 ticks to go, we all knew the chances of a recovered onside kick + a Hail Mary to win it were quiiiiiite slim. Yet, how did you, as a 12, feel?

I wasn’t out of it. The very vast majority of the 12s in the stands were still there cheering too! Even after the failed onside attempt, the crowd ushered an enthusiastic ‘Sea… Hawwwwks!’ to let the team know not only that we appreciate their efforts, but that we all know nothing is ever over with this team. And for us, the second season soon begins!

GREAT teams make you feel this way. And it doesn’t happen in the span of just one year. It culminates, builds, and permeates until it becomes the way.

With all that went sideways on Sunday, this team NEVER gave up. Baldwin broke records, Wagner waxed Gurley on numerous occasions, Shead defended his corner with passion, Tyler bounced up after getting slammed down, and Russell still did lots of Russell Wilson things.

To the desert we roll, but what does Pete do???

Chancellor, Okung, Bennett… all not 100% and wouldn’t you know that the Silver Linings Grey Book hints to us that all the sudden, the 6 seed might be a much desired path over the 5. What will Pete do?