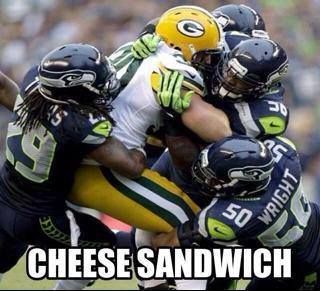 Ohhhhhhh my, we’re getting dangeRussly close ladies and gentlemen of the Flock. It all begins in the valley of the cheeeeese in just a few short days from now. And yes, I am fired up beyond belief to inform you all that 3 In, 3 Out will be back for our 3rd installment, our 3rd season, our 3rd go-round if you will, and we’re planning on making it count! Check in each week to your favorite Seahawks podcast – the Sea Hawkers Podcast of course! – as we’ll be posting weekly, unique recap blogs exclusively written for the pod!

REMINDER – each week, during the game, tweet @SeaHawkersPod or/and me @ClintonBon, use the hashtag #3i3o and we’ll make sure your contribution gets at least an honorable mention in the recap blog post! Also this year, we’ll certainly be opening up the 3I,3O goodness to the Sea Hawkers Pod Ring of Honor on Facebook. This group is a TON of fun, fully suggest YOU get in the flock.

OK, enough with the housekeeping you say… and I agree, we gotta get going, we gotta get gone and into and around and through this post as only 12s can… So, this week’s post. It’s not a season preview. Hawkblogger already crushed that with this series here. This isn’t a pre-season recap… we’re healthy and we’re better than we were last year, there’s your recap!!! This is an aforementioned cranny. This is a buttery nook. These are the 3 Seahawks you really need to watch in 2017!!! Let’s go go go go go and dive right into the single most important Seahawk barometer of 2017.

The Rich Get Richer

On last year’s season preview pod, I had the honor of proclaiming to Brandan and Adam that my breakout player of 2016 was none other than Frank the Tank Clark. My spidey-sense was going off that he – Clark – could put together a really amazing sophomore year… My Mamma Cleo must’ve been on that day because ooooooof Clark was a FORCE in 2016.

This year… I’m getting the tinglies about P-Rich. Not only did I love the S-Rich trade for what it provided to our defense, I felt that clearing the swim lane for P-Rich to step in as a starter with the departure of Kearse would really improve the explosiveness of our offense too.

We all know the caveat. So knock on wood, do a rain dance, you do you. We know, P-Rich has to stay healthy.

If these key metrics for the season are achieved by P-Rich, we are going to the Super Bowl.

I crafted but one article this entire off-season. I wanted to churn out more, but time, she is indeed a thief! I spent all my bullets on THE biggest mistake I felt we made during the offseason.

We failed to improve our O-Line enough, we took too many unneeded risks on reclamation projects like Joeckel, and we were living a FANT-asy thinking George could make a 2nd year leap to keep Russ upright in environments like Lambeau.

As crude as this sounds, I think we got better with the exit of Fant. I wish him nothing but a speedy recovery and a GREAT year 3, but for 2017, I think our line improved with his exit.

As we discussed at length in this article, as of August 7th, this team was NOT Super Bowl bound. Now, a few short weeks later, I’m starting to believe I was wrong.

The key, the keystone, the centerpiece… is Justin Britt. Not only did Britt ink a ‘good for both sides’ 3-year extension during the pre-season, he also looked pretty dang dominant! We haven’t had an extremely solid O-Lineman since the oft-injured Unger, and before that, well, Hutch and Jones were amazing of course.

With Britt as the anchor, this line has a legit shot to be decent! And if we’re just that decent, our Seahawks will be making the Super Bowl.

The Forgotten Man. A campaign constant for President Trump. A really intriguing book by Amity Shlaes focused on the Great Depression, even a pretty decent rock tune, by legend Tom Petty.

Just last year, riiiiiight about this time, ‘Hawks fans were all abuzz about the prospects of one Jarran Reed. We traded up for him in the 2016 draft and grabbed what many touted as a whale of a 2nd round pick for our Seahawks.

The excitement around Reed didn’t sharply fizzle so much as slowly fade, and Jarran didn’t underperform so much as not grab headlines with his consistent play. Our Run D was OUTSTANDING in 2016 and very often it was due to players like Reed filling their role – and their gaps – professionally and allowing others like Wagner, Clark, Wright and more to make big plays. Reed was more than above average last season against the run and on a line with the likes of Avril, Bennett, Clark, and now Sheldon … so what if he records only a few sacks?

While Nazair Jones was one of the darlings of pre-season – and deservingly so – Reed enters year-2, nearly as a forgotten man.

There’s no metric here to follow, this one is all about your gut. Watch the trenches with intent. If Reed is being consistent up the gut, consistently clearing lanes for our LBs and DEs to make big plays, consistently non-flashy but darn effective … our Seahawks will be marching on to Minnesota come February.

What say you Flockers?

Love to hear your opinion and who you believe will be the gritty, unsung heroes of our 2017 season!!!

Well this is it. A long, and actually quite eventful off-season is now behind us. Marshawn gone… behind us. Sherman on the block… behind us. New contracts for Bam Bam and Britt, an emotional goodbye to Chop Chop and a warm hello to our second Richardson… all behind us.

What’s next? The not so frozen tundra.

While the game may rest on Russell or Sherman or Bobby … or even Blair, don’t forget your nooks and crannies and keep your peepers peeled for P-Rich, Britt, and Reed to contribute in big, big ways on Sunday, and throughout this 2017 campaign!