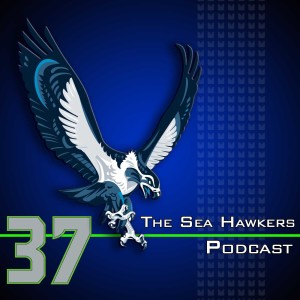 The Seahawks open up their final preseason game with a four-play, 80-yard touchdown drive and then proceed to close the season with a loss to the Raiders. Adam and Brandan talk about the ugly first and second quarter against Oakland’s new starting quarterback Derek Carr.

As expected, there were many more recognizable names among those cut from the 75 down to the 53-man roster. The guys break down some of the potential reasoning behind those decisions.

The first regular season matchup with the Packers is only days away! Adam starts the preview by feeling a bit nervous of the matchup, but as the two talk through it he feels much better about the potential for a win this week. Both agree the Packers will likely be the second-best team in the NFC.

John Hagengruber, life-long Green Bay Packers fan joins the show to help preview this year’s squad. John talks about the added dimension Eddie Lacy brings to the team, something the Packers didn’t have the last time these two teams faced, and some of the players to watch for on both sides of the ball.

In the last part of the show, we play a couple listener voicemails and thank those who have left reviews on iTunes and Stitcher. Brandan calls out an NFL writer for producing a meaningless list when there are plenty of other topics to write about now that the season is starting, and days after the league revises it’s policy on domestic abuse a 49ers player will be the first to be punished under that policy.

Adam gives commissioner Roger Goodell a “better at life” nod for acknowledging his mistake in the decision to suspend Ray Rice for only two games. Brandan’s pick is a Spokane high school student in the Make-a-Wish program fighting cystic fibrosis and was recently honored by the Seahawks.