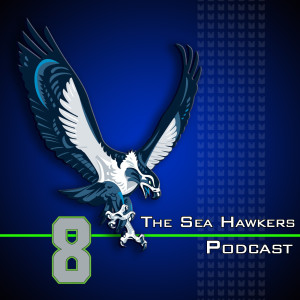 After a 45-17 win over the Jaguars this week, Brandan and Adam tip their hat to the Jaguars for doing something the 49ers couldn't do–score a touchdown at CenturyLink. After the game, the defense made a point in saying that giving up 17 points and 265 yards was unacceptable. Should fans agree with that view?

One thing that is becoming apparent is the improved chemistry between Russell Wilson and the Seahawks receivers. Brandan wraps up the Jaguars recap by trying to make Jacksonville feel a little bit better about their decision to draft Bryan Anger ahead of Russell Wilson (as much as that's possible). In a preview of the Houston game, Brandan expects a much closer game between the Texans and Seahawks. Despite having the #2 ranked defense, Adam can't find a single player on the Texans defense to give credit to.

Darin Pike, Seahawks columnist for Bleacher Report, comes on to talk about the teams in the NFC West. Having originally predicted the 49ers to finish third in the division, Darin now says they'll finish behind both the Rams and Cardinals.

Adam kicks of the inaugural “Do Better” segment by calling out Jacoby Jones of the Ravens. Brandan picks on Frank Gore for challenging his coach on the sidelines following the 49ers game against the coach. Finally, in “Better at life than Skip Bayless,” Adam contrasts Bruce Irvin to 49ers pass rusher Aldon Smith and Cardinals safety Rashad Johnson loses a part of his finger but earns a place on the “Better at life” list.